My flight, KLM 569, left Amsterdam and headed southeast, quickly leaving Holland and flying over Germany. Google Earth is probably the closest many people will ever get to this vantage point, but it is fascinating watching the flight path on the monitor in front of me and comparing it to the earth some seven miles below out my window. Over all of Holland and Germany the landscape appeared lush and green. We flew over Munich and then down the east edge of Adriatic Sea. Unfortunately, my first views of Greece weren't anything like what you see in the pictures :) Hopefully someday I'll get to visit Corinth, Delphi, Santorini, Athens, and Corfu closer than from 39,000 feet.

After flying over the Mediterranean Sea we entered the airspace over Egypt, crossing the north coast not far from Libya. The landscape was nothing but hundreds and hundreds of miles of sandy desert, punctuated by the occasional oasis of civilization indicated by some form of flora. Talk about desolation... nothing but sand dunes. As we approached southern Egypt the flat desert gave way to some relief in the form of hoodoo-like hills on the south side of the Nile river around Abu Simbel. Maybe they were mountains but from this altitude, their shadows cast by the afternoon sun were intriguing. Sudan from the sky doesn't look much different than Egypt: desolate desert plains with the occasional random mountain or ridge, like a gargantuan armored dinosaur buried beneath the sands with its spikes exposed by the constant desert winds. We flew directly over Khartoum, Sudan, and by the time we went over just the edge of Ethiopia, it was pretty much dark. From there we flew into Kenya where we landed at Kilimanjaro International Airport. Most of the passengers left at that point, I suppose embarking on a safari or to climb Africa's tallest mountain. There were only about nine of us that continued on one more hour to Dar es Salaam. 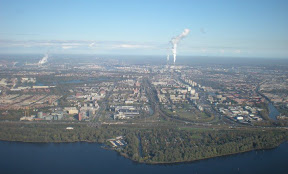 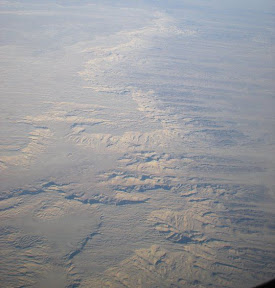 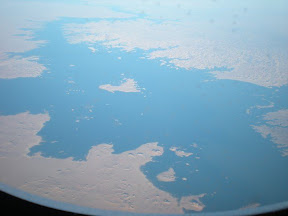 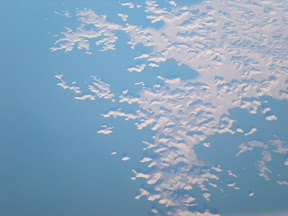 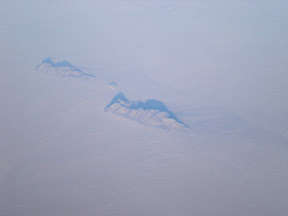