I slept just a few hours on the overnight flight from Atlanta to Amsterdam. When I awoke we were crossing Ireland and as the earliest hints of morning twilight dawned upon us, we flew over England's mid-section. The sun had just risen when we landed in Amsterdam about 6:30 a.m.
I found the KLM Lounge in the Schipol Airport, had some juice, and then sat down to get online and work for a bit. I had plenty of time before my next flight just after 10:00. Or so I thought. Sometime after 9, I started to wrap things up. I heard them call my name and hurried out of the lounge. My hurry turned into a run through the concourse as my angst grew. And with good reason. By the time I reached the gate no one else was around except for a couple airline staff. I handed the guy my ticket. He handed it to someone else, who handed it to someone else, who politely explained to me that my luggage had just been removed from the aircraft. I explained that I ran down as soon as my name was called and couldn't I please get on? Realizing my pleas would not avail me access to the aircraft, I sullenly turned and walked back down the concourse, wondering what to do next.
After accepting that I had given up my "extra" prep day before the training, I now set my mind on how to spend the rest of my day in Amsterdam. I could have stayed in a hotel at the airport and not left the four walls of my room all day, but that's just not me. I found a tourist info center who found a hotel for me across from the Centraal Station in Amsterdam.
It was over eight years ago, in May 2000, that I was in Amsterdam before. Somehow it felt vaguely familiar, like an old friend. After checking into the hotel, I set out with no particular destination and no objective other than to explore the city. It was cool and the streets were wet from recently fallen rain. The sky was mostly overcast, although the sun made an occasional token appearance through the clouds. 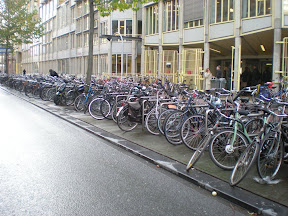 I eventually found a walking tour group which I subtly tagged onto for a few minutes until I got a chance to speak to the guide and found out it was a free, tip-based tour. Unfortunately, it was near the end of his tour and about the only thing I got was his compelling story of the Dutch resistance in standing up for the 425 Jews, or Amsterdamers as they viewed them, in February 1941.

The tour guide, Kevin, was from Boston, and was excellent. He was very passionate and interesting. With time to kill and wishing I'd heard more of his stories, I offered to buy him dinner if he had the time to repeat the tour for me. He didn't, but walked with me a few blocks until we parted ways, him pointing me towards a recommended restaurant, Haesje Claes which, I was told, has served authentic Dutch cuisine since the 1500s. As it was somewhat cold and rainy, I ordered a traditional Dutch stew, stamppot. It wasn't very good.
After dinner, I continued to walk around the city a bit, by the Westekirk, Anne Frank Huis, statue of Multatuli, and the narrowest house in Amsterdam (1.6 meters wide, less than the height of the average male Hollander. Apparently, Amsterdamers are taxed by the width of the front of their house). As I continued to walk, though, the rain continued to fall, so I headed back to the hotel where I ended up going to bed early so I could make up for the sleep I didn't get the previous night.
Click Here for more pictures from Amsterdam
Posted by Scot D. Weaver at 1:43 PM